skip to main | skip to sidebar

Eurozone leaders are in danger of setting Portugal on the same road as Greece The meeting of European finance ministers has become a theatre of low expectations. Gone are the heady statements that the eurozone crisis can be fixed.

The ministers are quietly satisfied that a bail-out for Portugal has been agreed. Greece - which was supposed to have been patched up a year ago - is in deep trouble again. There is no agreement on a remedy. It must wait for another day, another report.

The interesting feature of the bail-out for Portugal is that it largely draws from the Greek play-book; it's based on a plan that is failing to work in Greece.

The word used repeatedly to describe the Portuguese deal is "ambitious". State industries are to be privatised, the public sector slimmed down. Labour markets are to be loosened up and reformed. Education will be retooled to make college leavers fit for the 21st Century.

The challenge here is not just to squeeze the red ink out of the accounts but to change Portugal's culture. And it is a mighty task. Portugal's first decade using the euro was marked by low growth. But borrowing was cheap, and wages between 2000 and 2009 soared by 37%. Productivity stagnated. Labour costs went up and the country became uncompetitive.

Now, under the rescue plan, all of this has to be turned around. Ambitious it sure is. The chief executive of Banco Espirito, Santo Ricardo Salgado, says that if public finances are not dealt with and productivity improved, Portugal can look forward to four years of recession.

When you listen to Portugal's economists there are doubts everywhere. "The key question," says Emilie Gay of Capital Economics, "is whether Portugal can avoid another lost decade of low growth."

So is Portugal ready for a cultural revolution or, like Greece, will it start down the reform road only to encounter opposition, age-old resistance, in which the mood for change quietly burns out?

And the point is that without major changes the EU/IMF plan fails - as it has with Greece. "Without a structural reform agenda," says Antonio Garcia Pascual of Barclays Capital, "it is unlikely the country will grow out of its indebtedness."

In which case Portugal, like Greece, will be back in the emergency ward.

Which, of course, brings us to Greece.

The truth of the Greek story is relatively simple. In exchange for reducing their deficit they were loaned funds by the EU and the IMF. They set about cutting spending and raising taxes. They promised an era of reform. Twelve months on their debt mountain is only growing. The latest flicker of economic growth will have little impact.

Old practices are returning. Tax revenues are less than expected. A former anti-terrorist boss has been despatched to root out the tax evaders. Only this week a minister was talking about introducing evaluations into the civil service. He said "one of the many problems of the Greek state is that there is no such evaluation system... so no one ensures or has any incentive to perform better." The revolution in Greece has scarcely begun.

The Greek government has played what it considers its best card; 50bn euros (£44bn) of privatisations. The rest of Europe is watching and is yet to be persuaded this is happening.

Sony Kapoor, a former banker, says: "Greece has shown the limits of what can be achieved by austerity alone, without a much stronger focus on growth." He, like so many other economists, favours a restructuring of Greek debt.

The German Chancellor, Angela Merkel, is strongly opposed. She sees it as being incredibly damaging to the eurozone as a whole. "It would raise doubts about our credibility if we were simply to change the rules in the middle of the first programme," she says.

So officials struggle to find a way forward. They fear restructuring and yet they have no realistic plan to slim down the Greek debt mountain.

In Brussels there has been a discussion of re-structuring, yet not in public. They speak of a "re-profiling" whereby Greece's private creditors might be persuaded to agree to an extension of the period over which they get their money back. It will not address the fundamental problem and some finance ministers, like France's Christine Lagarde, oppose it anyway.

So the more likely option is more of the same. The hope that a cocktail of slashing spending, reforming labour markets, and privatising will finally work.

But Portugal has started on a road that has not worked for Greece.

Labels: Blame the state, Myth of progress, Peace is war

"Together, the present set of policy measures results in what is the main contribution of the CAP – a territorially and environmentally balanced EU agriculture within an open economic environment. Delivering more public benefits in future will require a strong public policy because the goods provided by the agricultural sector cannot be adequately remunerated and regulated through the normal functioning of markets."

SEDGWICK, MAINE - On Saturday, March 5, residents of a small coastal town in Maine voted unanimously to adopt the Local Food and Self-Governance Ordinance, setting a precedent for other towns looking to preserve small-scale farming and food processing. Sedgwick, located on the Blue Hill Peninsula in Western Hancock County, became the first town in Maine, and perhaps the nation, to exempt direct farm sales from state and federal licensing and inspection. The ordinance also exempts foods made in the home kitchen, similar to the Michigan Cottage Food Law passed last year, but without caps on gross sales or restrictions on types of exempt foods.

Local farmer Bob St.Peter noted the importance of this ordinance for beginning farmers and cottage producers. “This ordinance creates favorable conditions for beginning farmers and cottage-scale food processors to try out new products, and to make the most of each season’s bounty,” said St.Peter. “My family is already working on some ideas we can do from home to help pay the bills and get our farm going.”

Mia Strong, Sedgwick resident and local farm patron, was overwhelmed by the support of her town. “Tears of joy welled in my eyes as my town voted to adopt this ordinance,” said Strong. “I am so proud of my community. They made a stand for local food and our fundamental rights as citizens to choose that food.”

St.Peter, who serves on the board of the National Family Farm Coalition, based in Washington, DC, sees this as a model ordinance for economic development in rural areas. “It’s tough making a go of it in rural America,” said St.Peter. “Rural working people have always had to do a little of this and a little of that to make ends meet. But up until the last couple generations, we didn’t need a special license or new facility each time we wanted to sell something to our neighbors. Small farmers and producers have been getting squeezed out in the name of food safety, yet it’s the industrial food that is causing food borne illness, not us.”

“And every food dollar that leaves our community is one more dollar we don’t have to pay for our rural schools or to provide decent care for our elders,” adds St.Peter. “We need the money more than corporate agribusiness.”

Three other towns in Western Hancock County will be voting on the ordinance at or ahead of their town meetings in the coming weeks. Penobscot, Brooksville, and Blue Hill all have the ordinance on their warrants.

http://www.chelseagreen.com/content/maine-town-passes-landmark-local-food-ordinance/
Posted by A.S. at 19:26 No comments: 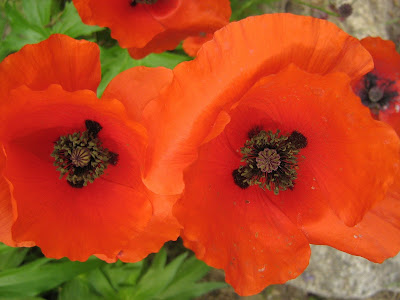 A.S.
Born in Bavaria, grown up in Portugal, mainly on a farm in Beira alta. From 1999 to 2003 I studied Biology at the University of Coimbra. In 2004/05 I did a master's in "Environment, Science and Society" at the University of Essex. Currently I'm about to finish my PhD in Environmental Science on agricultural marginalisation.